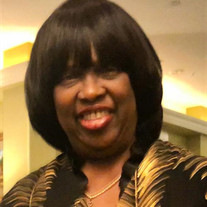 Theresa Herring, 71 of Staten Island, New York passed away on Tuesday, March 15, 2022. On Christmas Day in 1950, Theresa Ann Herring was born to Cleary and Hazel Pedro Herring in Staten Island, New York. Theresa committed her life to the Lord at age 3, and was baptized at Shiloh AME Zion Church, West Brighton, Staten Island. Theresa's undaunted dedication to God as a young child, later developed into a lifetime commitment in service to ALL people. Theresa experienced the tragic loss of her father at age 4, and the death of her mother from breast cancer at age 8. After her parent's deaths, Theresa and her siblings, with the embrace of Elders, moved into the Family Homestead in Historic Sandy Ground, Rossville, Staten Island, New York. The ''Family Homestead'', a sprawling home built by Theresa's Grandfather, William 'Pop' Pedro, still remains standing. Sandy Ground, settled in 1833 by free black persons, is the oldest such community in the US, and was also an integral way-station along the ''Under-ground Railroad''. Theresa is a bona-fide descendent and property owner of one of the existing Sandy Ground homes, and is a Patron member of the Sandy Ground Historical Society, Inc. Ms. Theresa Ann Herring graduated from Public School #3 in Pleasant Plains, and in 1969 from Port Richmond High School, both in Staten Island. Her commitment to serve ALL people, led to her pursuit of Nursing. She studied first at Adelphi University, Long Island. Never fearing a challenge, Theresa transferred to the Bayonne Hospital School of Nursing, Bayonne, New Jersey in 1969, and was the only African-American student in attendance until she graduated in 1972. She received a Registered Nurse Diploma. She attained certifications in both Emergency Nursing, and Ambulatory Care during her Nursing journey. Nurse Theresa Herring, started her career as an Intensive Care Nurse at Mt. Sinai Hospital in Miami Beach, then in 1973, as a Nursing Supervisor (Medical-Surgical) at Beth Israel in Manhattan. From 1993 to 2020, Theresa continued to serve ALL people as a Certified Registered Nurse at Staten Island University Hospital-Northwell Health. She served with proficiency as an Emergency Room Nurse, Ambulatory Nurse, and Special Nurse Instructor during the COVID-19 pandemic. Through her many years of nursing service, she was recognized as a proven leader and staff mentor. Among the many awards, commendations, and compliments from staff and patients she received, Theresa was particularly proud to achieve the Northwell Medical Center President's Award for Nursing Excellence. Ms. Herring became a licensed Real Estate Broker, and from 1988 to 1993 she worked with the Century 21- Appleseed Realty Company. Named ''Associate of the Month'' in 1989. Ms. Herring remained an active Member of the Rossville AME Zion Church, and served as the Rossville AME Zion Life Members Council Chairperson of the Women's Home and Overseas Missionary Society (WHOMS). Theresa is a Life Legacy member of the National Council of Negro Women (NCNW) - Staten Island Section, as well as a Life Member of the National Association for the Advancement of Colored People (NAACP). Theresa Ann Herring is survived by her loving Sister Lucille Herring, RN and a host of cousins' including, Vincent and Maureen Beamon, and Jackie Hagar of Elizabeth City, North Carolina, and Jerome Moody of Durham, North Carolina, as well as, Olivia Moody, Joyce Moody, Adrienne Blair, Robert McKinnie and Katherine McKinnie-Thompson, Jane and Soji Oluwole, Denise N. Pedro, and Sylvia D'Alessandro of Staten Island. William Pedro, III, of Maryland, Thomas Pedro of New Jersey, and John Pedro of New York City. We are grateful for the years of cherished memories that our dear Theresa has imparted with her dearest Friends. Services for Ms. Theresa Ann Herring will be held at 11am on Saturday, March 26 at the John Vincent Scalia Home for Funerals, 28 Eltingville Blvd., Staten Island, New York. The service will be Livestreamed and can be viewed by going to Theresa Herring's obituary page at www.scaliahome.com In lieu of flowers, donations can be sent to the Rossville AMEZ Church-Missionary, in her memory.

The family of Theresa Herring created this Life Tributes page to make it easy to share your memories.

Theresa Herring, 71 of Staten Island, New York passed away on...

Send flowers to the Herring family.