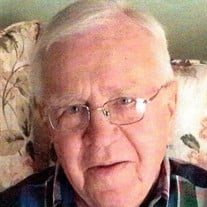 Thomas J. Leahy, 90, passed away on Monday, January 3, 2022. Born Tuesday, July 28, 1931 in Brooklyn, New York, he was the son of the late Ernest Leahy and Teresa Lewis Leahy. Thomas worked first as the Vice President for Arlington Press in Brooklyn. He later worked for C&C Cola as the Vice President in Elizabeth, NJ. Thomas proudly served in the United States Navy from 1950 to 1954. In his younger days, Thomas enjoyed golfing and fishing. He cherished family vacations and has many fond memories in Lake George and Saratoga. Thomas was an avid horse racing fan, and would often place bets on races. He also enjoyed playing lotto. Thomas was the devoted husband of the late Susan, who predeceased him in 1983. Loving father to Patricia Leahy-Bellanza (Richard), Carol Leahy, and the late Thomas who predeceased him in 2000. Dear brother to Joan Stogner. Cherished grandfather to Jennifer, Robert, Stephanie, and Christopher. He is also survived by his 4 great grandchildren. The family will receive friends from 2:00 PM to 5:00 PM and 7:00 PM to 9:00 PM on Thursday, January 6, 2022, at John Vincent Scalia Home for Funerals, Inc., 28 Eltingville Blvd, Staten Island, New York. A Mass of Christian Burial will be held at 10:00 AM on Friday, January 7, 2021 at Our Lady Star of the Sea located at 5411 Amboy Road Staten Island, New York 10312. Interment will be in Resurrection Cemetery, Staten Island, NY.

The family of Thomas J. Leahy created this Life Tributes page to make it easy to share your memories.

Send flowers to the Leahy family.