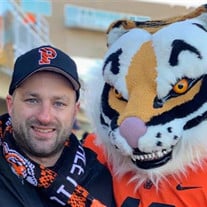 Timothy (''Tim'') William Boardman, 34, of Manhattan, suddenly passed away on Monday May 31, 2021. Born on August 17, 1986 in Staten Island, NY he was the son of Russell William and Lynn Marie (Tobin) Boardman. Tim was a loving warrior who was truly larger than life. He was a true champion of life. Intelligent and very athletic with his "All American" good looks, he lived a storied life only found in a Hollywood script. Born and raised in the Great Kills section of Staten Island, he attended St. Clare School. As a child and teen he excelled at school and sports. He athletic skills were so good and in demand that he once played both a youth soccer and pee wee football game during the same time, switching uniforms and equipment multiple times. Tim attended Poly Prep Country Day School where he highly performed in academics, acting and athletics. He was a top high school football player for the Poly Prep Blue Devils while they were a nationally ranked football team. Tim went on to attend and play college football at Princeton University. Tim was a member of the University Cottage Club. At Princeton. Tim had a storied football career as a middle linebacker with multiple achievements. He was a leader and dominate player. Tim was on the 2006 Ivy League Championship team and was named First-team All-Ivy performer in 2007. In 2019 he was named to a prestigious list of ''Top 100 All-Time Princeton Football Players.'' After Princeton, Tim went to work on Wall Street for over a decade. Tim worked for various brokerage and investment firms where he forged lifelong professional and personal friendships. One of his greatest achievements prior to his death was founding his own financial services firm 8 Point Capital Partners, LLC. The name originates from the Boardman family crest, eight-point buck antlers. Tim added fun and enjoyment to any situation, and as clich" as it sounds was truly the "life of the party." He treated everyone with the same level of respect whether you were the building janitor or the head of an investment firm. He always talked about the importance of legacy and his love for Princeton. His legacy will live on in the droves of people whose lives he positively impacted. One of his last achievements he talked about was being an Uncle. He was blessed to have met his niece Kirsten Rose and know that the Boardman name and legacy lives on. Beloved brother of Russell, Kathleen and Courtney Dear brother-in-law of Erika. Proud Uncle of Kirsten Rose The family will receive friends from 7:00 - 9:00 p.m. on Saturday, June 5, 2021 and from 2:00 - 4:00 and 7:00 - 9:00 p.m. on Sunday, June 6, 2021 at the John Vincent Scalia Home for Funerals, Inc., 28 Eltingville Blvd, Staten Island, New York. 9:45 a.m. on Monday, June 7, 2021 at St. Clare Church located at 110 Nelson Ave Staten Island, New York 10308. Interment will follow in Resurrection Cemetery, Staten Island, NY. Contributions in Timothy's memory can be made to St. Jude's Children's Hospital, www.stjude.org

Timothy (''Tim'') William Boardman, 34, of Manhattan, suddenly passed away on Monday May 31, 2021. Born on August 17, 1986 in Staten Island, NY he was the son of Russell William and Lynn Marie (Tobin) Boardman. Tim was a loving warrior who... View Obituary & Service Information

The family of Timothy William Boardman created this Life Tributes page to make it easy to share your memories.

Send flowers to the Boardman family.