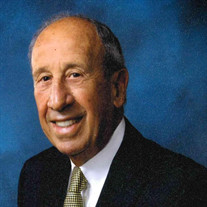 Vincent M. Bufano of Wilton, Connecticut, passed away October 21, 2021 at the age of 87. Vince was a man of faith, grace, and giving who left us with a lifelong legacy of personal and professional achievement, and a powerful embrace of family and friends that we thought would go on forever. Vince was born and raised in the Bronx, one of two children of Michael and Giovannina Bufano. He is survived by his wife Libby, the love of his life for 63 years wonderful years, his cherished children, Lori Bufano (Jeff), Michael Bufano (Nancy) Danielle Bufano Mancuso, Elizabeth Bufano, and his loving grandchildren, Joseph, Jack, Michael, Elizabeth, Nicholas, and Natalia. He is also survived by his beloved sister, Claire Cialone, his nephew Anthony Cialone and niece Michele Shanahan. He was a dedicated husband, father, and grandfather whose greatest joys came from his unbridled relationship with his immediate family in the United States, and with his extended family in his beloved Italy. His and Libby's loving involvement with their children and their grandchildren has brought boundless happiness to both. Vince was the first in his family to attend college, graduating from Villanova University in 1956. He crafted an extraordinary business career in the medical equipment field, first at E.R. Squibb, and then for four decades at Baxter Healthcare Corporation. He was one of the important architects of Baxter's expansion nationally and globally until he retired as Vice-President of Professional Relationships in 2010. He was an incredibly astute connector of people and a mentor to many, and took enormous personal pride in the individual, team, and client achievements that grew out of those relationships. Giving of himself was a hallmark of Vince's life. In the years that followed graduation, Villanova recognized him for his tireless contributions to the university and all that it stands for and awarded him the Blue White Scholarship Foundation Loyalty Award. And later still, in 1991 he received the St. Thomas of Villanova Alumni Medal, the highest honor the University Alumni Association bestows. Vince also served on the Board of Trustees of Mount Vernon Hospital (now Montefiore Mount Vernon) for over 20 years, including 13 years as its president, ending in 2009. He was on the board of Livingston (Health Care) Services, and was the only lay person ever to be appointed to the Board of Trustees of The Academy of Anesthesiology, this in recognition of his ongoing treatment contributions to the medical community, and to the patients they serve. Locally, Vince was actively involved with the Norwalk Catholic Club, and was a fourth degree member of the Knights of Columbus. He was also a very active and influential member of Shorehaven Golf Club, heading multiple club committees including the Admissions and Golf Committees, serving on the board twice, and serving as the club's president for two different terms. He was a friend to all members, and a fierce champion for every single member of the club's staff. To honor this extraordinary man's life, family and friends will gather on Friday, October 29th from 5- 8 p.m. at Our Lady of Fatima Church, 229 Danbury Road, Wilton, CT. A Mass of Christian Burial will take place Saturday, October 30th at 9:00 a.m. at Our Lady of Fatima Church followed by Entombment in St. John/St. Mary Cemetery, Norwalk, CT. In lieu of flowers memorial donations may be made to; GREENWICH HOSPITAL FOUNDATION 5 PERRYRIDGE ROAD GREENWICH, CT 06830 giving.greenhosp.org In Memory of Vincent M. Bufano https://giving.greenhosp.org/honor-vincent-bufano/ The wake and funeral mass will be live streamed on the parish website. Please visit olfwilton.org . Please visit the church's website and click on the red ''Watch Live'' button.

Vincent M. Bufano of Wilton, Connecticut, passed away October 21, 2021 at the age of 87. Vince was a man of faith, grace, and giving who left us with a lifelong legacy of personal and professional achievement, and a powerful embrace of family... View Obituary & Service Information

The family of Vincent M. Bufano created this Life Tributes page to make it easy to share your memories.

Send flowers to the Bufano family.