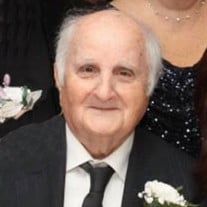 Vincent James Gaito, 99 of Great Kills, passed away peacefully on Monday, February 14, 2022, at Staten Island University Hospital North in Staten Island, New York. Born Wednesday, September 20, 1922 in Brooklyn, New York, he was the proud son of the late Joseph and Assunta Gaito. Vincent spent most of his life in Brooklyn before moving to Staten Island in 2005. He was employed by United States Postal Service as a postal carrier until retiring in 1976. Vincent served in the United States Army from 1942 until 1945. A radio operator during his service, he dutifully and heroically served in the Pacific Theater during the height of World War II. He was honorably discharged as a T4 rank, with the most eternal thanks of a grateful nation. Vincent married the love of his life, Rose, after returning from his Army service. They were married for 45 years until Rose's passing in 1993. Vincent missed Rose every day since she departed, so there is no doubt that their heavenly reunion was filled with exuberant rejoicing. Together, Vincent and Rose created their most wonderful successes in their children Mary Mannino, John Gaito, and the late Joan Piccarillo and Jimmy Gaito. Eight cherished grandchildren and eight adored great-grandchildren will carry on Vincent's legacy, weaving their own notes into the endless songbook of life. A lover of music, Vincent's life represented a most beautiful symphony. He was talented enough to play several instruments, but truly enjoyed his time playing in the great ensemble of the Post Office Marching Band. He was active in the Watkins Kellett Post of the American Legion. When not enjoying time with family or friends while enjoying the sweet sounds of laughter, Vincent would listen to the unique notes that only nature could provide while he made beautiful his garden. The family will gather and receive friends from 10:00 a.m. to 12:00 p.m. on Thursday, February 17, 2022, at John Vincent Scalia Home for Funerals, Inc., 28 Eltingville Blvd, Staten Island, New York. A Mass of Christian Burial will be held at 12:30 p.m. on Thursday, February 17, 2022 at St. Clare Church located at 110 Nelson Ave Staten Island, New York 10308. Interment to follow will be in Resurrection Cemetery, Staten Island, NY.

The family of Vincent James Gaito created this Life Tributes page to make it easy to share your memories.

Send flowers to the Gaito family.